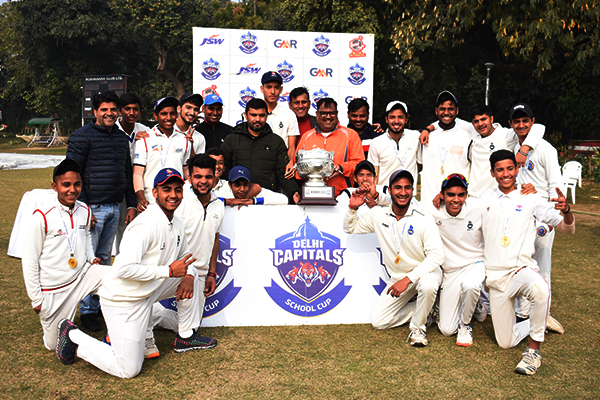 Over the years Indian Premier League Delhi franchise, the Delhi Capitals (erstwhile Delhi Daredevils) has organized the School Cup – a tournament for U-17 students from schools of the Delhi NCR.

Winners and outstanding performers stand a chance to share the nets with players from the Delhi capitals team during the IPL season 13, and even an opportunity to win a scholarship with the Delhi Capitals Academy.

Yet another spectacular performance by the cricketers representing our school in the 7th DC cup by winning it for the second time and becoming the only school to win this title twice.

Bal Bhavan had its final against Salwan School, wherein toss was won by Bal Bhavan who decided to bat first. It was a slow start and we were losing wickets at regular intervals, but thanks to Aditya Chaudhary who scored 70 runs and stood at the crease from start to the end.  The target by our team was set at 140 and the opponents were swiped all out at 62 with the help of Vanshaj Sharma and Ishan Sharma who took 3 and 2 wickets respectively. The man of the match was given to Aditya Chaudhary for hitting 70 runs and Man of the series was claimed by Arpit Rana who shined bright like a diamond by scoring two double centuries and two massive centuries throughout the tournament.

The school is immensely proud for these young and talented players who are promising and spirited throughout their matches. And also thanks the Delhi Capitals for organizing this tournament for the betterment of these blessed and enriched players.