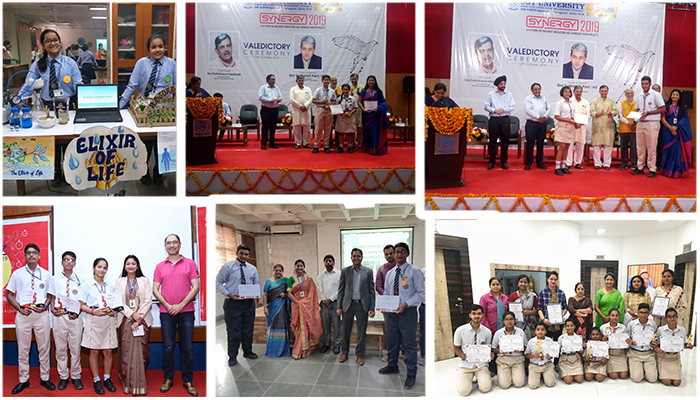 Budding scientists of BBIS proved their genius intellect by acclaiming laurels and were bestowed with praises and appreciations.

Ravleen kaur of class XIth and Bhavya of Class IXth participated in ‘Synergy -2019, Inter school science Competition held at  SGT University Gurugram wherein more than 250 models from Delhi NCR competed for the title. The team from BBIS exhibited a model on modern agriculture Technology-AGRONOMIST’s COMPANION and bagged 3rd position for the same thereby receiving Certificate, Trophy and a cash prize of 5000/-. Garv Garg and Aradhaya made a Drone that aided in obstacle free medical aid and received Special Recognition along with a cash Prize of 1100/-.

In National Science Quiz Competition held at Shoolini University, Solan; team of Himanshi Shekhawat of class XII, Sumit Kumar and Akshat Sharma of class XI reached top ten and received Certificate and Trophy in appreciation of their excellence. The students were selected after an intra school round held in the premises of BBIS and moved on to compete at Inter School level.

Garv Garg and Souparno Ghose of class X participated in INter School Robo Fest and secured 1st position in ROBOWAR. The team of boys indulged in ‘Robo Fight’ for first round and moved on to the second round which was interactive question answer round, thus claiming their winning title. Diksha, class VIII and Anushka, class VII displayed a working model on ‘Water Conservation’ and bagged 2nd position.

Heartiest Congratulations and appreciations for the students and their mentors!