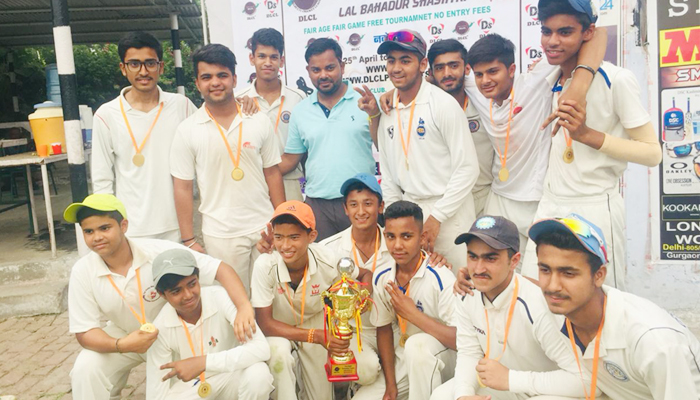 The N Khanna  Bal Bhavan Cricket team has long been considered a formidable opponent.  The team recently participated in the DS Sharma Memorial Cricket League .The tournament had some of the best and most reputed cricket clubs from all over Delhi. Despite the tough competition they successfully reached the final with some great performances along the way. In the final they faced the Pioneer Cricket Club. They had proven themselves to be a great squad and were bound to be quite a challenge.

In the final N Khanna  Bal Bhavan Cricket team won the toss and decided to bat first. They scored an impressive 248 runs at the loss of 9 wickets (248/9). Arpit Rana and Aaryan Sharma scored 56 runs and 55 runs to propel their team through the 1st innings.

Pioneer came on to the field to try and score a mammoth total of 249. But the N Khanna  Bal Bhavan Cricket Team bowlers balled an amazing spell and bowled out the opposition at 188 runs. Sampoorn Tripathi (4/14/3),Arpit Rana(5/19/2),Saksham Singroha(8/46/2)and Prince Rana(8/35/2) produced an outstanding bowling spell to completely blitz the opposition line up.

With this win N Khanna  Bal Bhavan won the DS Sharma Memorial Cricket League and lifted the prestigious trophy. Arpit Rana was awarded Man of the Match in the final for his great performance. Prince Rana was awarded the bowler of the tournament by taking 16 wickets and for consistently impressive bowling performance through out the tournament. Man of the tournament was awarded to Aditya Chaudhary, as he was highest scorer, made 510 runs in 5 matches inclusive 2 centuries & 1 double century and hit 80 4’s. Arush Malhotra was declared best wicket keeper. The players and coaches were surely elated by the results and will not be forgotten for a long time.